HostGator vs BlueHost - Which Is Better In 2020? 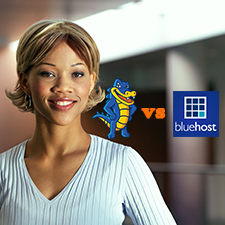 Looking for an in-depth comparison between HostGator and BlueHost for shared web hosting? Here is the best place that help you judge the two web hosts considering for their shared hosting speed, reliability, technical support, price, real customer reviews and user cancellation rate.

We have signed up accounts with both HostGator and BlueHost, and have tested the services from every aspect that may affect the user experience. The following summary table is made based on our over 8 years’ experience on web hosting rating & review, so you can refer to it getting the best information.

HostGator is bigger than BlueHost in the overall size. HostGator is serving 5 million customers on web hosting, virtual private server, dedicated server and reseller plans based on the both Linux and Windows platform. Out of question, HostGator has the good reputation in the web hosting industry, but actually their Linux shared web hosting is not as cost-effective as BlueHost.

BlueHost, founded in 1996, one of the largest Linux-based shared web hosting providers, offers rich-featured shared web hosting as well as launching VPS and dedicated servers in 2013. It is a technology oriented company that has customized the Linux kernel for the enhanced web hosting reliability, security and performance, and is the only shared web hosting company having 3 dedicated data centers in Utah, US that has invested over 20 million USD since 2010. With 500 experts and 5,000 servers, BlueHost is serving 2 million users now, and it’s still fast growing with 20,000 new customers monthly.

HostGator is a reputed comprehensive hosting company, but BlueHost is the largest and well-known professional Linux-based web hosting company. In this case, we recommend you going with BlueHost.

Both HostGator and BlueHost offer three hosting packages for customers to choose based on the ultimate needs and requirements. In the following, we’d like to compare the most popular and cost-effective plans offered by them – BlueHost Starter, BlueHost Plus, and HostGator Baby.

BlueHost Starter plan and Plus plan is starting at $5.99/mo and $9.99/mo regularly, but it’s now offering a compelling discount that is up to 60% off to reduce the plans down to $3.49/mo and $3.95/mo respectively. Customers can get the discounted rates by going through this promotional link.

HostGator Baby plan is starting at $5.96/mo with a 25% discount using coupon code BHS25OFFHG, but it doesn’t support a bunch of technical features such as the free dedicated IP and free private SSL.

Considered with the price, BlueHost is much more affordable than HostGator.

* Noted: the discounted price of new signup is cheaper than the renewal, because they both only provide a discount for the first billing. So, whichever you decide to go, it’s better to choose a long billing cycle for the best price and max saving.

The table below compares the features of the HostGator Baby plan with the BlueHost Starter plan and Plus plan.

BlueHost supports almost all the latest cutting-edge technologies based on Linux platform, and it’s the only web hosting company providing so many features as compared with the 100+ companies which we have reviewed so far. With a free domain name included, it’s more rich-featured than HostGator.

Both HostGator and BlueHost web hosting are the unlimited web hosting services, but the thing that really surprises us is that the BlueHost CPU Segregation technology which intelligently limits the CPU usage and memory allocation for every shared account to protect the over-usage of bad users. BlueHost is not only a company that simply resells servers, but having a large development team and investing millions of USD on developing new technology in every year. With the better focus and investment, BlueHost web hosting is faster than HostGator.

We signed up with these 2 hosting companies for the performance comparison using a site with the same WordPress program and the same content. As the testing result, we found BlueHost performs much better than HostGator, including the performance on database query, web page generation, and client page rendering.

As the statistics chart shown above, the WordPress site hosted with BlueHost is approximately 6% faster than HostGator in the real world.

HostGator has a good reputation on the technical support in the industry as they have 1,000 staffs serving for 5 million domains and websites over the world. BlueHost has approximately 200 staffs serving for 500,000 domains and websites. You can easily consider that 1 HostGator staff serves for 5,000 domains & sites and 1 BlueHost staff serves for 2,500 domains & sites. With the workload of a BlueHost staff is just the half of HostGator, their service quality is better.

In fact, both of them offer 24×7 US technical support via toll-free telephone, live chat and email. With short holding times, these web hosts can commit their customers are assisted by professionals with the best efficiency.

We had traced 500+ real customer signups with HostGator and BlueHost since the beginning of 2012. The 28% of signup with HostGator would be cancelled after 3 months, but the 92% of customers remained with BlueHost after the same time.

The most important reason for the relatively high cancellation rate of HostGator signup is, many customers choose the short term plan of HostGator at the beginning, but they cannot accept the renewal price that is $8.95/mo of Hatchling hosting and $9.95/mo of Baby hosting.

Based on the 494 verified BlueHost customer reviews received at the leading review site BestHostingSearch.NET, the 99.5% of customers are satisfied with the overall web hosting service, as the following statistics chart displays. Also, you can read through each customer voice at this voting page.

As a conclusion, BlueHost is better than HostGator. The site HostingReview360.com is hosted with BlueHost. If it is not excellent, we won’t build our site hosted with it! By the contrary, if you still want to choose HostGator, you shall be very careful for their renewal price, and go for a longer subscription. With HostGator 45-day money back guarantee, the purchase can be risk-free.