Which is Better Bluehost or DreamHost? - Comparison & Review 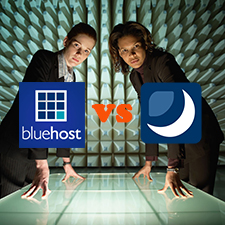 BlueHost is definitely a much better choice than DreamHost based on the comparison from the price, web hosting capability, features, reliability, technical support and speed.

BlueHost and DreamHost, 2 historical web hosting companies, are both concerned in the web hosting community that had a lot of things in common at the beginning. However, with the over 15 years’ development, today BlueHost is nearly 700% larger than DreamHost in size and has the terrific accreditation in the marketplace.

(The marketing data above for BlueHost and DreamHost was researched by the end of 2012.)

Originally, DreamHost web hosting is pricing from $5.95/mo, but they have increased the cost from $8.95/mo in 2009. Compared to DreamHost, BlueHost Plus plan is starting at $9.99/mo originally, and now available from $3.95/mo for those who going through this promotional link. As the following pricing table, DreamHost is almost 100% more expensive than BlueHost. Additionally, you have to provide your credit card information to DreamHost as they don’t support PayPal as BlueHost.

The shared web hosting services from BlueHost and DreamHost have a lot of features in common, including free domain name, unlimited disk storage, unlimited monthly bandwidth, addon domains, email accounts, PHP 5, MySQL, Perl, Python, Ruby on Rails, etc, but BlueHost Plus plan is even better rich-featured. Read the differences below,

In fact, the DreamHost money back guarantee is misleading the consumers. When you read the Terms of Service (although no people read these frustrated things!), you will realize that the DreamHost guarantee is only valid if you pay by credit cards, and excludes the domain registration fees, account setup fees and dedicated server payments.

BlueHost is one of the fastest Linux-based shared web hosting service of the 100+ providers that we had reviewed so far. Unlike other web hosting companies renting servers, it independently invests and builds data centres and servers from the ground up. Besides, BlueHost has been keeping partnering with some of the world’s largest ISP’s.

DreamHost chooses a data center located in Los Angeles. The performance of sites hosted with DreamHost is actually better than the average of all the web hosting services that we had reviewed, but it’s much slower than its competitor in the experiment that our editors did the performance comparison. Read statistics below.

Out of question, the brilliant reputation of BlueHost comes from their super reliable web hosting service. If their servers went down frequently, they had no possibilities to have such a large base of customers. BlueHost guarantees their shared web hosting service is more than 99.9%, and they commit their promise in the action.

DreamHost is worse than BlueHost. Since we had a testing account signed in June 2012, we have encountered 3 problems in the recent 2 months. On June 13th, The testing site was down, reporting a “bad_httpd_conf” exception. When we reported the problem to DreamHost, we received this explanation: “We apologize for the outage. This was caused by a typo while changing our machine database”. On July 1th, we reported that the site was down again, this time with a message that the database was unavailable. And on July 23th, the email service stopped working and we got the feedback from DreamHost to say “A couple of our SMTP servers are having problems with the daemon which authenticates users via SMTP. We’re looking into it right now.”

BlueHost provides 24×7 100% US-based technical support live chat, email and phone, and guarantees that the waiting time is less than 30 seconds on average. With experts preparing to offer help, you can be assured that the staff helping with your site knows how to help.

The customer service DreamHost is a little frustrated. The company doesn’t offer free phone or live chat support unless you purchase the premium support package which costs $9.95/mo. Even though DreamHost claims to provide Live Chat service, but in our real hosting experience, it has never been available.

DreamHost only provides email technical support that advertised as Los Angeles based, but actually when we complained about general server problems, it usually took over 12 hours to get the problems resolved. Without the telephone and live chat support, the advertising US-based support is not trust-worth.

DreamHost is far away from being a reasonable web hosting choice in our mind. Their service is very expensive in the marketplace, but their service quality still needs to be improved for matching the price. So, We think BlueHost is the better choice.